Rich in diversity –
the horizon of Sonoma Country awaits you

Sonoma County graces the North Coast with its rugged coastline, ancient redwoods, majestic native oaks and flowing carpets of vines over hillsides and through inland valleys. Meandering throughout this diverse scenery is the sinuous Russian River, running through the northern end of the county, turning west at Healdsburg and eventually emptying into the Pacific Ocean at the coastal town of Jenner. The appellation totals more than one million acres of land and includes 13 distinct sub-appellations, with about 60,000 acres planted to vines. Millions of years ago, much of the area was an inland sea. Cataclysmic tectonic upheavals of the coastal plates created the Mayacamas Mountains, the county’s eastern boundary. In contrast, the gently rolling hills of the southern edge in Carneros are dotted with grazing sheep alongside row upon row of Pinot Noir, Chardonnay and Merlot vines. Running the length of the county’s western border, coastal hills shield the inland valleys from the extreme coolness of the Pacific Ocean.

Grapes and wine are integral to the history of Sonoma County, planted and cultivated as early as 1812 by Russian colonists. Spanish missionaries later planted several thousand grape vines at their mission in Sonoma in 1823. By the time of the “Bear Flag Revolt,” and California’s annexation by the United States in 1854, M.G. Vallejo had an established commercial vineyard. In 1855, Agoston Haraszthy, considered to be “The Father of California’s Wine Industry, purchased a vineyard and renamed it Buena Vista, California’s oldest premium winery. Commissioned by the California legislature in 1861 to research viticulture in Europe, he returned from abroad the next year with more than 100,000 cuttings of prized grape varieties to start the 19th century wine boom. Vineyards and wineries thrived until the arrival of phylloxera and Prohibition in 1919, all but wiping out the burgeoning industry. It wasn’t until the 1960s, that a renaissance began to occur. Today, there are more than 250 bonded wineries, about the same number listed in 1920.

Luther Burbank called Sonoma County “the chosen spot of all the earth as far as nature is concerned”. A food and wine paradise, Sonoma County is blessed with a Mediterranean climate, sufficient rainfall and vastly diverse topography. Revered for foodstuffs varying from organic farm fresh produce to goat cheese, Pacific oysters and Muscovy duck, the region is also conducive to growing nearly every premium wine grape variety. Wine tour professionals can handcraft a customized visit, introducing seasoned travelers and adventurous gourmands alike to this cornucopia of sensual delights. Picturesque towns mingle among the myriad vineyards, offering restaurant menus designed around local products. Small family-owned wineries nestle along country lanes and back roads, in the midst of rustic inns and luxury resorts. European villas share the same visual space as timeless brown barns. Whether a grand chateau, an old Victorian or a redwood cabin, the hospitality offered in Sonoma County winery tasting rooms is warm and inviting. This authenticity is rooted in the history and heritage of the birthplace of California wine.

Farming has been a way of life for generations in Sonoma County, and genuine community spirit exists among the growers and wineries. There are dozens of multi-generational growers and winemakers, and many small farmers. More than 80 percent of the county’s vineyards are comprised of 100 acres or less; roughly 40 percent are less than 20 acres. From small to large producers, Sonoma County winegrowers share a connection to the land and its history. The old families preserve the legacies and traditions of their ancestors; the new families, and the large companies, bring modern ideas and styles. Agriculture defines the region, and visitors are invited to share the spirit and beauty through the people and the food and wine they produce. 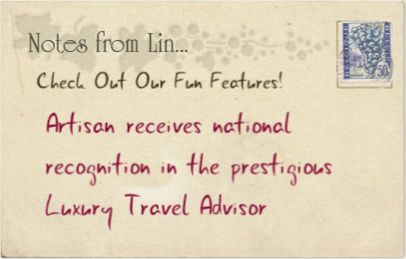